Back in my days as a new grad speech pathologist, I formed this idea that dummies were a terrible, ghastly device that would cause all sorts of issues in a baby’s development. When I was pregnant with my first baby, my feet were planted firmly in the anti-dummy camp as I proudly ticked the box on my pre-natal form to declare that I did not want my baby to be given a dummy in hospital. (Turns out they don’t have them anyway, so I’m not sure why it’s on there in the first place.) 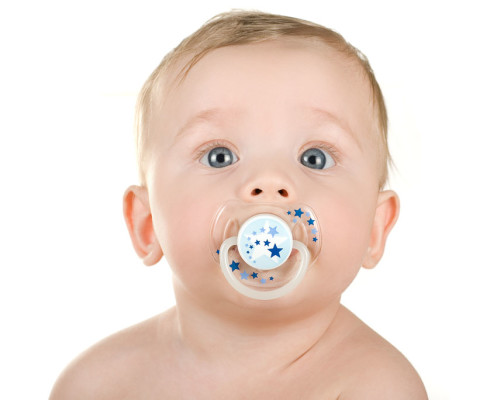 Then came the out-of-this-world shock of having a new little baby to care for. As I stumbled around in the fog of sleep deprivation and trying to keep this new little person happy, my resolve weakened. When my baby boy was 2 weeks old, I was walking in the zombie like trance of a new parent in Target. I’m still not sure how that packet of dummies ended up in my basket… Perhaps I bumped something and it just happened to fall into my basket (that’s my story and I’m sticking to it). When I got home, I put the dummy in a cupboard. “It’s there as a just-in-case, emergency measure”, I told myself.

Not more than a few hours later, I had an infant who seemed to think the world was ending. He was fed, burped, wrapped, warm, snug, cuddled, put down to sleep, but was wailing at volumes I’m sure could be heard throughout the neighbourhood…. and possibly Mars. My resolve crumbled. I grabbed a dummy, popped it in and… suck suck suck suck… sleep. Just like that. This little device had turned from abhorrent to magical in the space of 10 seconds.

So, just like that, I was a dummy convert. My position on dummies has changed immensely! However, the reasons for my anti-dummy mentality was grounded in some important concerns. Having a dummy for too long can affect your child’s speech and language development.

Babies love to babble. They love to experiment with sounds and this is a really important part of learning to talk. A baby who constantly has a dummy in his mouth may not experiment as much with babbling.

If baby does decide to babble and talk with the dummy, that has its own problems as well: talking with a dummy in the mouth can cause a child to get into a habit of talking with their tongue in a different position than usual talking and can result in a speech sound disorder. Prolonged dummy use (that is, using a dummy beyond 18 months) can certainly result in articulation difficulties, particularly with the sounds s,z,sh,ch,t,d,n.

Children who are allowed to walk around with dummies are in trouble if they slip over and do a face plant. At Liberty Speech Pathology, we once treated a child who had several teeth knocked out by falling over while sucking a dummy. Eeeek!

Many speech pathologists recommend that dummies be gone by 12 months of age. Personally, I recommend that dummies be gone before 6 months of age. I think I just heard a few gasps of horror… “What? Ditch the dummy before 6 months?” you say? Let me explain. A 12 month old has a good grasp of object permanence. She knows that something exists, even when she can’t see it. Her memory of objects is better than that of a 6 month old. A 12 month old will remember it for longer, recognise it as a desired object when she sees other babies with it, and will take a lot longer to forget that it existed. A 6 month old? You can expect a few rough nights, but after that it will be forgotten. In fact, it is around 4 months of age that a baby’s sucking reflex begins to diminish. After this, a baby doesn’t really need the dummy. Using it beyond this stage is when dummy dependence begins.

A dear friend of mine has a son (now a teenager) who was weaned off the dummy at age 1. When his parents took it away, they told him that he didn’t need it because he was a big boy. Making the connection between his object of desire and ‘big boy’, he spent the next several nights crying at night, calling woefully down the hallway for his “biiiiiiiig boooooy”.

That’s a really cute dummy story, but his parents remember how hard the habit was to break.

My firstborn was 6 months when we ditched the dummy. We planned it for a weekend and expected that it would be a tough few days. I stocked up with chocolate and all kinds of treats for my husband and I, knowing that we may need some goodies to get through (seriously, chocolate was decidedly necessary)! Sure enough, it was a tough first night. I spent a lot of time patting my little boy to comfort him and he eventually went to sleep, after a couple of hours. The next day, he didn’t have his first nap, so we resorted to a driving nap in the afternoon and he was out like a light. That night, he got to sleep a little faster. The third night, he protested briefly before giving up and sleeping through the whole night. From that night on, he slept through without needing a dummy.

When my baby girl came along, I had already decided to ditch it earlier. I settled on 4-5 months, to see if she’d be less attached at that age. Then came the infamous night that will go down in my memory as the “Fourteen Dummy Spits” night. Fourteen times, my little girl woke up crying because her dummy had fallen out. Fourteen times, I got up and replaced it. The next day, I decided that the dummy was going that night. She was not yet four months old, but that was that. We put her down with no dummy that night, and she protested for about half an hour. That’s it. And that was it for the whole time – it was as though she had forgotten about it altogether! Easiest dummy ditching ever.

So was it worth introducing it in the first place? Absolutely, for me. It helped me get through those first three months when babies are still sorting out their sleep patterns and have a strong sucking reflex. It gave my babies a predictable signal that it was time for sleeping. It gave them comfort when they woke up during the night. I also think that it helped with dropping night feeds as they had something to suck on. However, once they started waking through the night, its usefulness no longer compared to its down side.

So, if you do decide to use the dummy, here are my best tips for dummies with babies:

Now, while my recommendation is to ditch the dummy while baby is still little, there are plenty of parents who have chosen to keep the dummy for longer. If you’re ditching the dummy with a toddler or pre-schooler, you can ditch it cold turkey as well. Or, if you prefer a gentler method that will take longer, read on. These are strategies that we have accumulated at Liberty Speech Pathology for ditching the dummies with toddlers and pre-schoolers:

‘Forget’ the dummy on a family holiday. Holidays are great for breaking habits and providing opportunities for clean starts. The excitement of holidays and all of the extra fun treats and activities should be a great distraction, and by the time you go back home, the dependence will be broken.

If your child has had a dummy into toddlerhood or preschool years, it’s a good idea to go to a speech pathologist just to check on your child’s development. A speech pathologist will do an assessment to see whether the dummy has affected their speech or whether they are on track. If it has affected their speech, it is best to treat it sooner rather than later to reduce the impact as much as possible. Paediatric speech pathologists are lots of fun and we have lots of fun games and activities to make therapy enjoyable for kids.

Disclaimer: The information on this website, Facebook posts and blog posts is provided for the purpose of education and promotion. It is not intended to replace personal Speech Pathology assessment and management nor medical or other professional care for a child. It is recommended that you discuss any concerns or questions you might have with your Speech Pathologist and managing Doctor.